Feel the sea spray on your cheeks. Sense the wind in your hair. Feel the sun on your shoulders. Feel the sand beneath your feet. Feel the water rush up between your toes and run back down the beach again. Smell the salt air. Listen to the pulsating sound of the waves. Sense the power. Hear the healing energy.

“Like us, the sea is ever-changing. And, like us, the earth’s vast oceans appear at a distance to be stable and homogenous. But beneath the mask of solidity that both we and the sea wear, there lies unpredictability, sensitivity, and power. There is much we can learn from the ocean, representative as it is of our inner landscapes. The rough sounds of the sea’s waves are spiritually soothing, and its salt can purify our physical selves. Yet not everyone has the luxury of living by the shore or even visiting the coastlines where water and land meet. The ocean, however, exists in our conscious minds, put there by images we have seen and descriptions we have read. Wherever we are, we can access that mental image and use it as the starting point from which we can help to heal our emotions by meditating on the sea.

Just as the ocean’s tides sweep the shores free of detritus, restoring balance, so can the waves in our mind’s eye cleanse our souls of what no longer serves us.”

For about a year I’ve been on a little journey which began when I picked up a brochure (can’t even recall where I got it), a call for entry for Threadworks: A Juried Exhibition of Needle Arts. This is an exhibition, organized every three years by the Ontario Network of Needleworkers’ (ONN) an amazing group of dedicated people, mostly women. Their mandate is to raise the profile of needlework to the general public.

The 2013 theme “Water” really excited me. Selection into the show would be made on the basis of interpretation of the theme (I always focus better if I work around a theme.)  A substantial part of the piece had to be made with a threaded needle and of original design. No kits here baby!

The theme of water is a timely one. Fresh water is our greatest natural resource. We are losing control and access to it, drop by drop. I believe the right to safe, clean drinking water is a human right. We are nearing the end of the United Nations International Decade For Action “Water for Life” 2005-2015.  Its’ resolution states:

“The human right to water is indispensable for leading a life in human dignity. It is a prerequisite for the realization of other human rights”. Comment No. 15 also defined the right to water as the right of everyone to sufficient, safe, acceptable and physically accessible and affordable water for personal and domestic uses.

This really strong connection to clean water comes from my chemist father, W. M. Ward, who began the first public health laboratory in Manitoba in 1942. He chaired the Federal-Provincial Working Group on Drinking Water, the body who published the standards for Canadian drinking water quality in 1978. These are still in use today.

I have a compelling desire to be close to a large body of water on a regular basis. I need to hear the waves (no doubt this is why I named my Etsy store, WaveSong.) I grew up on the shores of Lake Winnipeg. It is the 10th largest fresh water lake in the world and the most eutrophied (that’s bad). It’s struggling to balance too much agricultural run-off, with excess nutrients and pesticides, and sewage discharge which causes toxic algae.*

For the last year I’ve had this idea of water and needlework sloshing around in my brain while the Threadworks Call For Entry sat on my desk. My intention was to make my entry in the summer. Last summer came and went. I totally forgot about the brochure. I actually didn’t even think about it again until this March when visiting our wonderful little local art gallery, Gallery in the Grove. Strewn on the entrance table were some Artist’s Call For Entry brochures from various Canadian galleries. Oh yah, now I remember! When I got home, I excavated the brochure from the pile on my desk. My brain woke up and my journey went into high speed. I had just over three weeks to get a piece from conception (but I did already have a small drop of an idea percolating) to completion. I looked at my calendar… not much booked. It was doable. 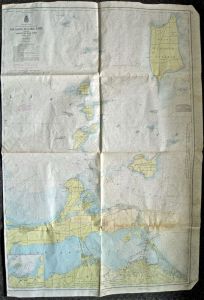 My basic idea was a coiled basket, a vessel, sort of a rag basket, but made from paper, particularly nautical charts or maps of the Great Lakes Erie, Huron and Ontario, recycled from my deceased uncle’s sailboat.

When it comes to my artwork, I’m a bit obsessed with recycling. Maybe it’s just because I’m super cheap when it comes to supplies. Or because, as my son calls me, I’m a ‘functional hoarder’. I scoop up thread, paper, old maps, rope, fabric, clothes, mostly all from yard sales and thrift shops. I don’t necessarily have a specific project in mind when buying. Everything gets added to my magpie stash. Any good artist needs a stash.

Actually containers are one of my favourite things. And maps. And I loved the idea of a vessel for this water-themed show. I’ve hand-stitched and machine-sewn lots of coiled baskets before. I had been experimenting with some techniques of sewing coiled baskets with paper instead of fabric.  After breaking numerous needles, what seemed to work was when I settled on one intended for sewing leather.

Sew….. I journeyed into constructing this vessel on my sewing machine.

Driving it for many hours I realized that the lake-like shape which I wanted to produce would be a bugger to fanangle on a machine. Unlike throwing a clay pot on a potter’s wheel, I couldn’t just go upwards equally on all sides which I normally do for most of my baskets.

I wanted this one to look like a dried-up lake bed, a contour elevation map and a vessel all rolled into one!

“But Will It Hold Water”

Of course this is a play on words. When we have a new idea, “will it hold water?” is a term we use for “is it worthy, does it have merit?” There are holes in this basket. Would the vessel float? Our freshwater bodies, will they hold water? This convoluted idea of mine. My weird humour. Was it worth so much of my time? Yes, I needed to finish this journey.

The actually process of sewing is kind of fun, at the start. I’m visual and auditory. I like hearing the needle punch through the paper. But it’s really hard on the hands to wrap the paper tightly and maintain the angle of the work. And then, of course, the bobbin runs out at the most inopportune moment (enter expletive here….)  Stitching was a bitch and I nearly threw in the towel. But I had already put too much effort and time into the process to give up. Determined I was!

Gratefully, my artistic muse, who only lives a few doors down, dropped everything a scooted over. Her encouragement gave me the stamina to continue when my spirits were low, my hands were aching and I questioned why I was using one of the most difficult means of construction available to a needleworker.

Trust the process, I’ve been taught.

The piece morphed from an oval mat shape to a dried lake bed, 3D contour map to a wave-like pieces splashing around one end. In the end it really was a process. I was thrilled with the outcome. It was an idea which seemed to work. But would anybody else ‘get it’, most importantly the jurors? What artist doesn’t struggle with that need to translate one’s ideas into matter? The alchemy of spinning straw into gold.

And then I had to construct the shipping box. This is another story completely! If it got accepted into the show it also had the possibility of being chosen for the 3 year travelling exhibit. There were strict guidelines to follow in the Call For Entry.  In order to protect the vessel I had to build a large shell of styrofoam (so totally un-environmentally sound that this incongruity did not get lost on me) surrounded by corrougated cardboard. Help came from my wanna-be engineer husband.

On delivery day we drove the three hours to Fergus, Ontario, a lovely town in Mennonite country. I had not entered a juried art show in awhile. “What did I have to lose?” I kept telling myself. A small entry fee, a beautiful spring day outing with my daughter, and, oh ya, hours and hours hunched over the sewing machine! Over 150 entries to be juried and they would only accept about 50. I was a little nervous. I felt like I was leaving my baby at the doctor’s office. I would’t hear for a few days whether my effort would be recognized as the brilliant piece it was. : )

Well this morning in my ‘Inbox’ was the correspondence an artist lives for, recognition from your colleagues that you were on the right track. “But Will It Hold Water” was accepted into Threadworks 2103 and I also won a Juror’s Choice Award (happy dance)!! They did ‘get it’ and my message about fresh water is going to a wider audience to make viewers ponder.

Threadworks is a special project of ONN in association with Wellington County Museum and Archives. The inaugural exhibition is mounted there, then will travel to museums and galleries across Ontario.

If you would like to see my piece (which looks much more impressive in person, it’s very hard to photograph) I am inviting you to see this spectacular collection of needlework any time from April 20 until June 9, 2013 or join me at the Opening Reception and Awards Ceremony:  April 28, 2:00 to 4:00 pm, Wellington County Museum and Archives, Fergus, ON. (Stayed tuned for the obligatory award ceremony photos and the itinerary of the travelling exhibit. It may be on it’s way to a location near you.)

I thought my little journey was about to end. It just took a three year detour!