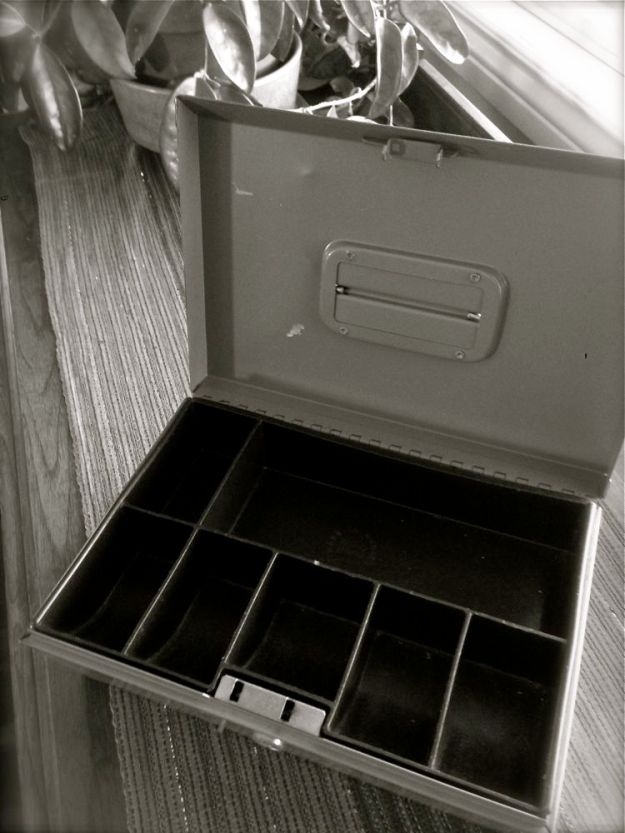 Having to dig out my cash box from under a layer of renovation dust in preparation for tomorrow’s MORE THAN JUST a BOOK SALE at Brescia College sort of gave me pause. I don’t like promoting consumerism. But normally the upshot of being an artist is that you want will to show your work to others. And sometimes those people will want to own your work for themselves. (In the olden days they were called patrons.)

Mostly I sequester my art to my little corner of the internet called Wavesong. I create what makes me happy, take photos, post and sometimes it appeals to someone who happens to find it in the huge Googly world.

Quietly I throw things up to see who catches them. A little ring holder was mailed to South Korea, a framed fibre art piece to USA, a basket to Australia, a tote to Boston, a chair pad to Newfoundland a set of fibre art pictures was purchased by a CBS set decorator.

In preparation for the first craft/artisan market I have done in a decade I have been unabashedly flogging Facebook with my wares.

As a sorry Canadian, I apologize for blowing my own horn, for telling the world about myself, for wanting you to see what I do in the recesses of my studio. I can’t help but create. 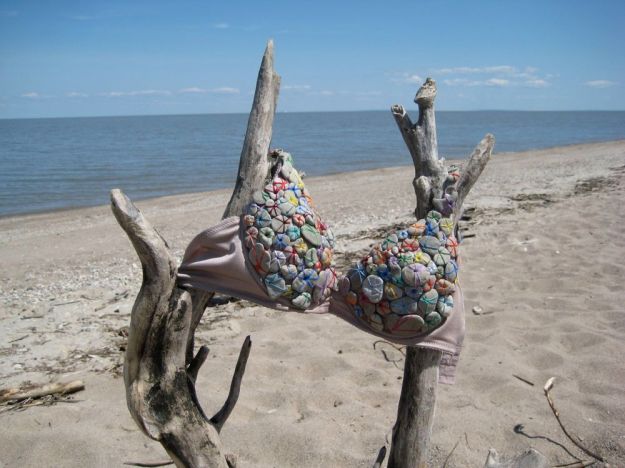 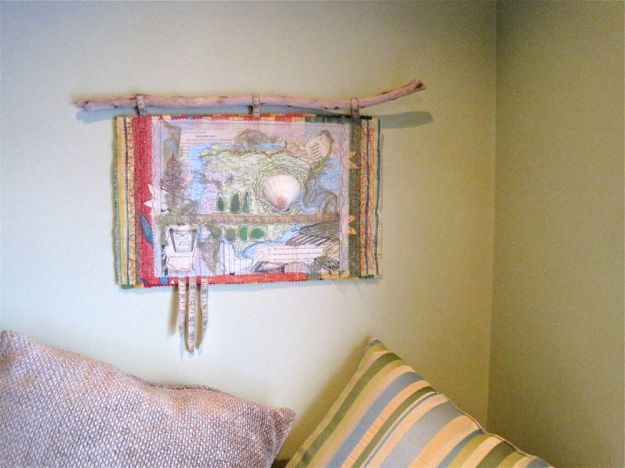 I do admit that I for the most part like creating useful things. Perhaps it is my Protestant work ethic showing its pretty little face or my mother’s voice saying ‘it’s lovely honey, but what’s it for?” 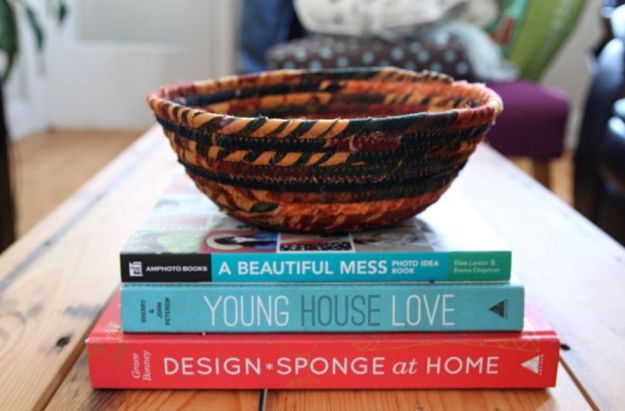 Like any artist I could just keep it until my house overflows or give it all away but I desire to be fairly compensated for my work. The fact is that most of us do consume and like to be surrounded by pretty things, hopefully ones that have some meaning. I know that people will buy things anyways. I would rather that they spend their money supporting local artists rather than multi-national companies who barely pay a living wage.*

I often wonder if the greats, like Monet, Michelangelo, Tom Thomson (not that I am anywhere close to being in that classification!) struggled with creating versus promoting. Did they have to pull out their cash boxes?

Etsy just released an interesting report on the demographics of their sellers, entitled,

It was based on the survey responses of over 5,500 American Etsy sellers. Most are women who are running their businesses on their own from home. 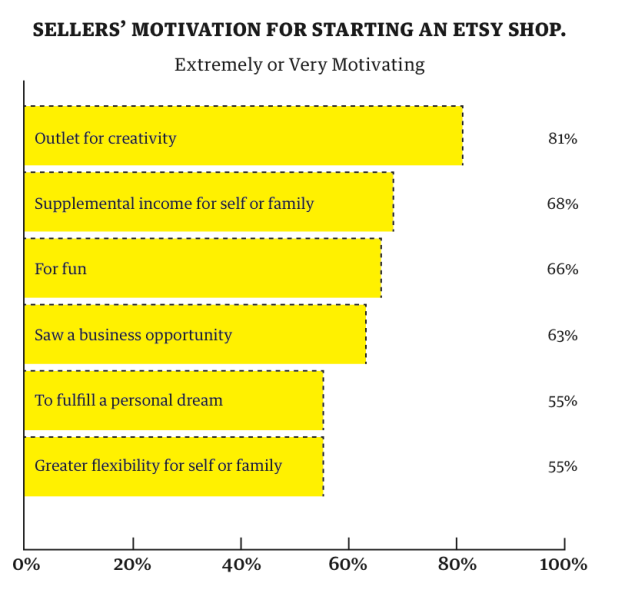 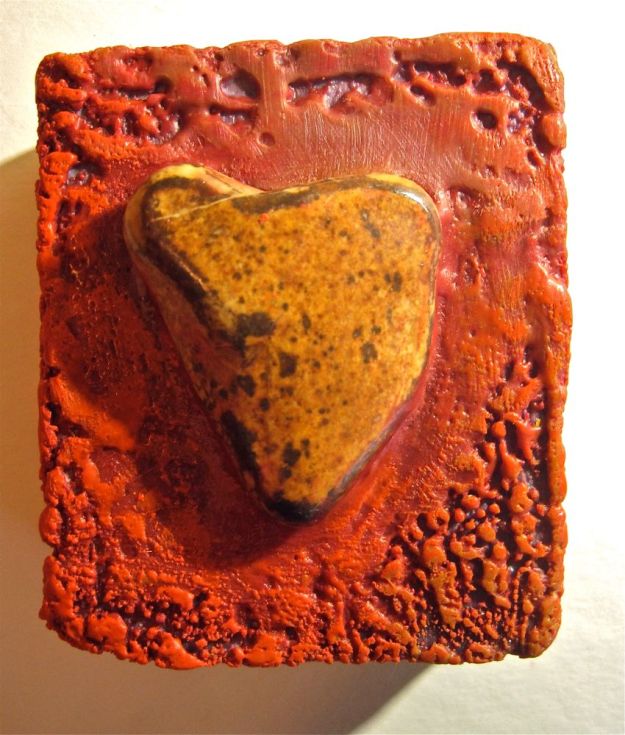 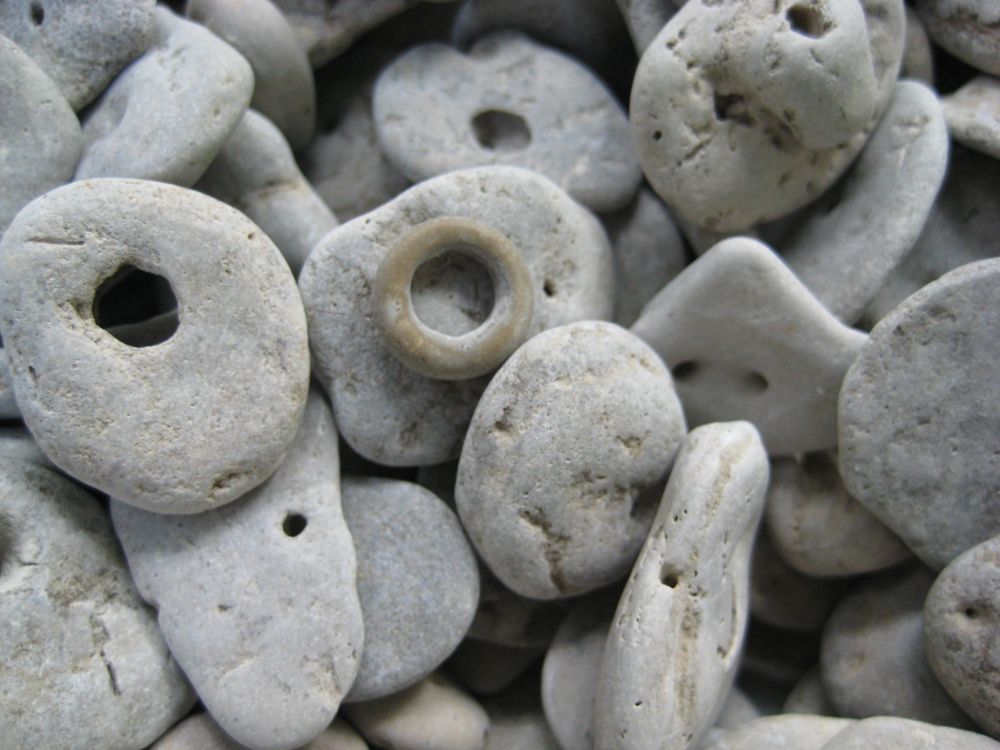 I have this addiction, some might say obsession, with collecting stones. These specimens are stones with naturally occurring holes found on the beaches of Lake Winnipeg around Gimli, Manitoba, Canada.

Some call them crinoids but they are more likely to be gastropods. These ‘lucky stones’, which we locals lovingly call them, are imprints and “negatives” of gastropods or snails.

I wanted to know more about these fascinating stones so I sent some samples to “Ask-a-Geologist”. I got an identification from Jean Dougherty, Geological Survey of Canada.

“The most prominent feature of the gastropod is the spiral-shaped shell. These can vary considerably in shape from a low whorl to a high whorl. Now imagine that these gastropods (snails) have died. Over time, the soft body of the snail would have rotted away leaving only the shell. Then imagine the shells having been buried in sediments at the bottom of some sea. Over millions of years, more sediment builds up overtop of them, and presses them into sedimentary rocks (this process is called ‘diagenesis’). The shell also undergoes a chemical transformation in which it is mineralized, becoming a rock. Depending on the rock type containing the fossil, either the fossil could be weathered away, leaving a hollow space where the fossil once was, or the rock could get worn away leaving the fossil, or some combination of these two. In the case of your samples, the third process happened. The fossil eventually dissolved and disappeared, leaving rock, but some of the rock was weathered away also. Depending on the degree to which the rock was worn away, you are still left with some amount of the fossil’s structure still visible. The spiral shell of the gastropod turns around a central hollow tube which gets narrower as you get to the point of the spiral. That is why, in some of your samples, the hole is wider on one side of the rock than on the other side of the rock – they are what remains of that narrowing tube.”

Stones that have natural holes have always been considered mystical and sacred, with special healing properties, windows into the soul and doorways into other dimensions. These stones are reported to have extremely powerful magical properties, the most important of which is protection.

In 2011 I received a wonderful email from a woman in the United States:

“I am a camp counselor/ trip guide at a wilderness canoe camp based in Ely, Minnesota, and will be leading a month long trip in Woodland Caribou Park and down the Bloodvein River into Lake Winnipeg beginning in late July. I have been searching far and wide for something special to give to my three 16-17 year old campers to commemorate our adventure together this summer, and your necklaces seem perfect: they are relevant to the place we will be traveling, they are simple and naturally elegant, and I love the idea that they offer protection, as this will be my camper’s first experience with whitewater paddling.”

I designed 5 matching necklaces for them.

Apparently they are especially lucky when given to someone.

One has to be lucky to find these stones. The trick is to look for the hole, not the rock. 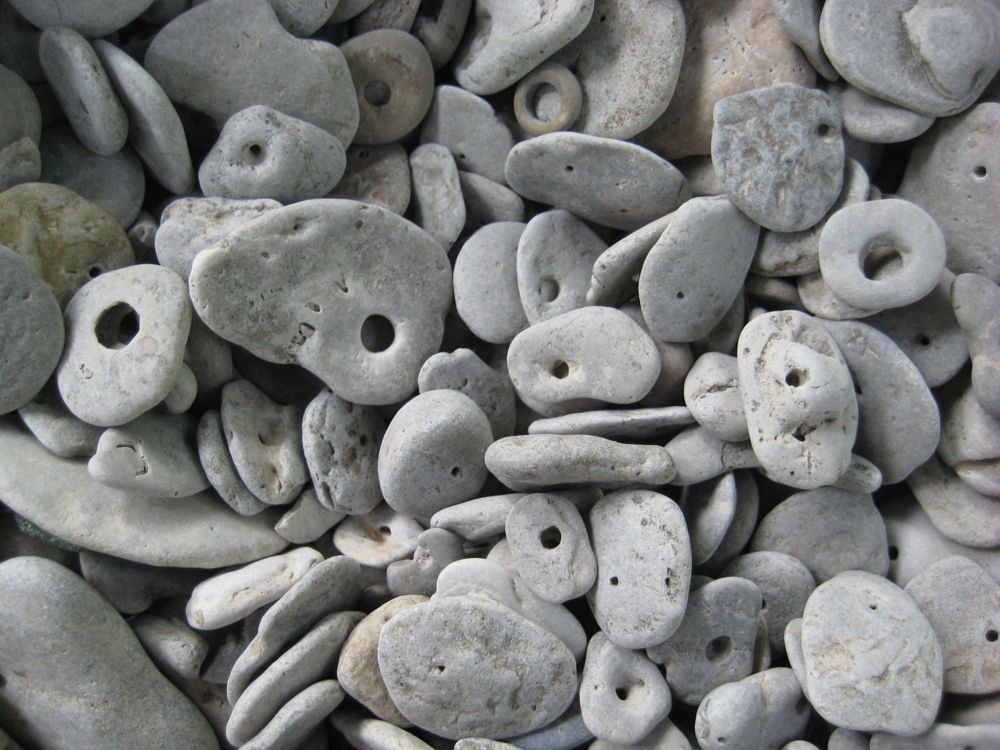 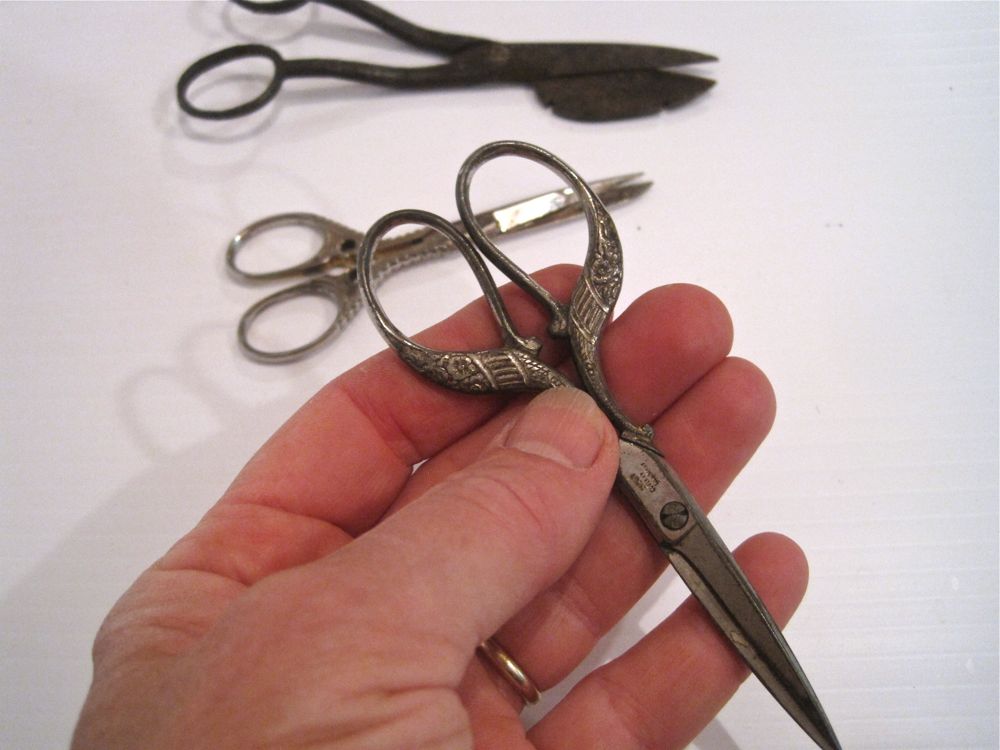 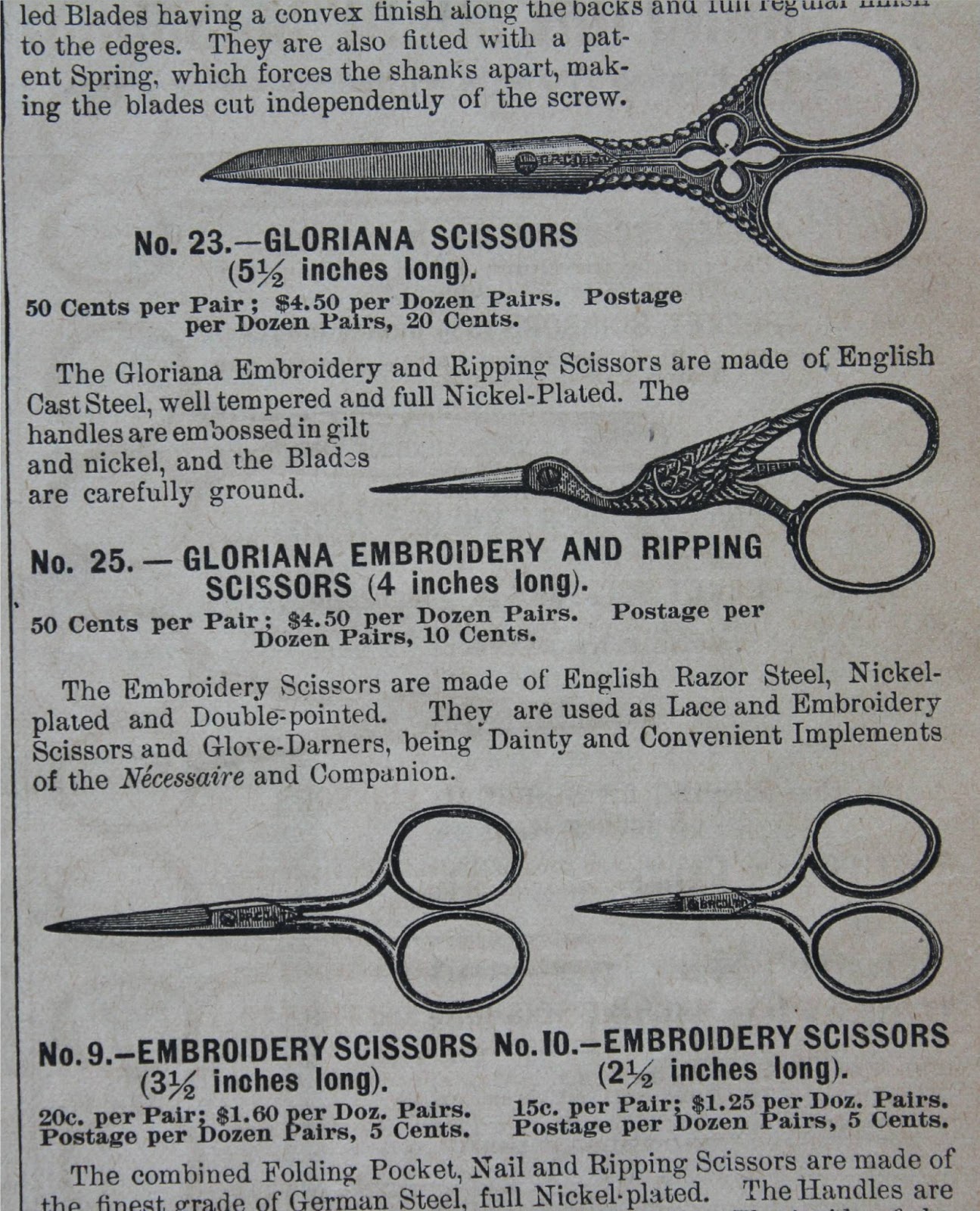 An advertisement from an old magazine from the late 1800’s. 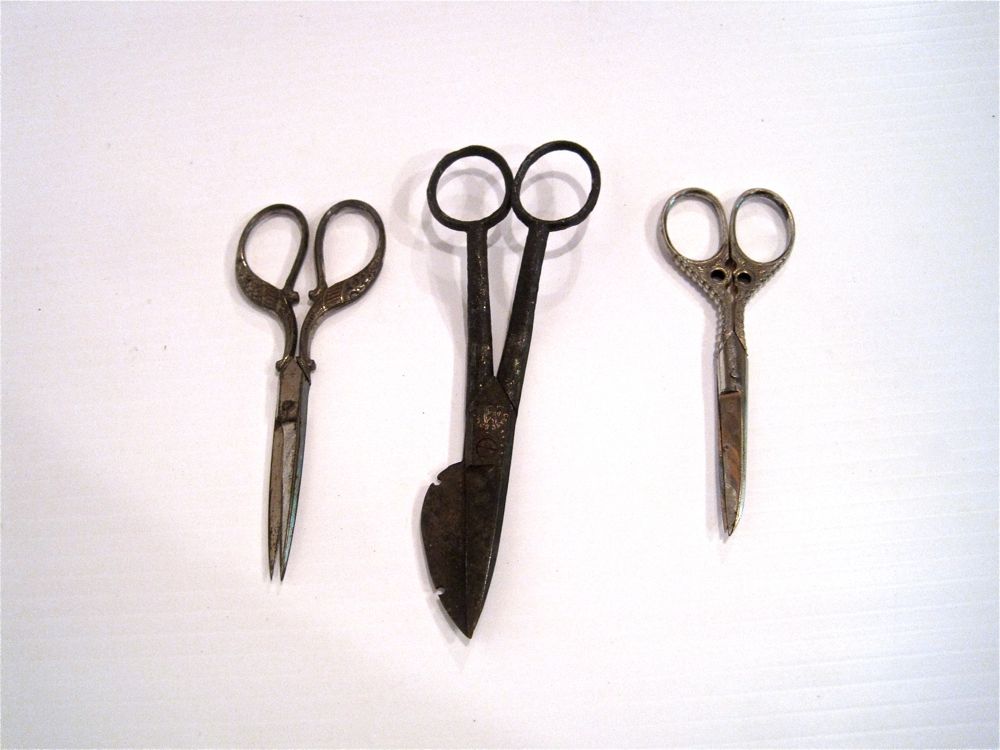 I think the one set in the middle are candle wick trimmers. Am I correct? 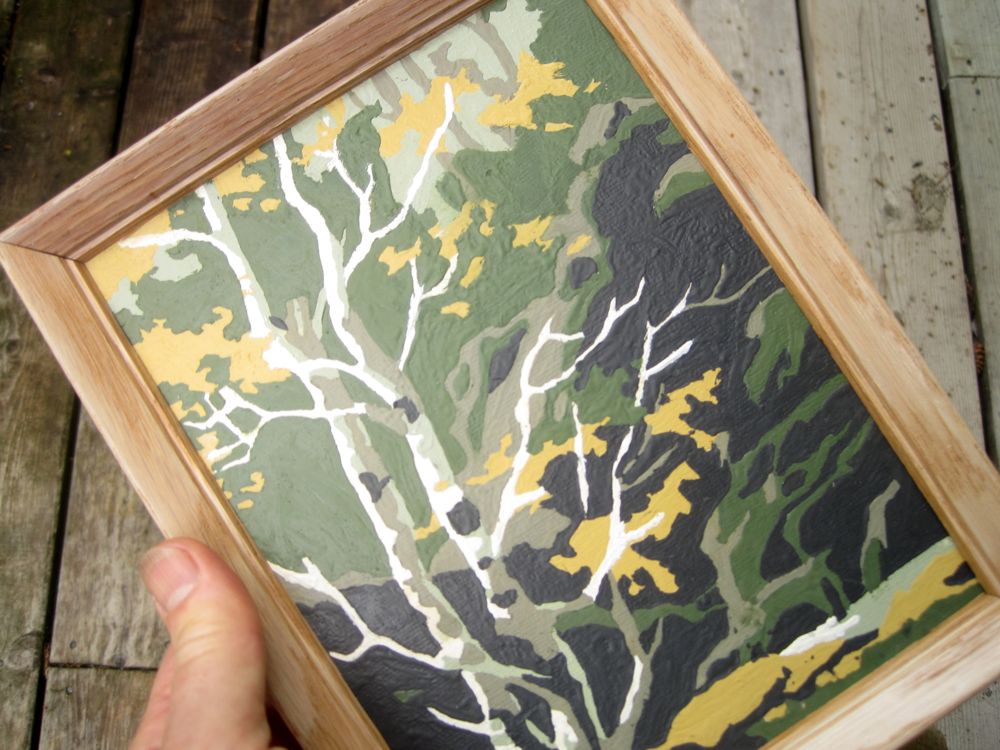 Available to buy at https://www.etsy.com/ca/listing/155206427/paint-by-number-forest-scene-cottage

Paint by number art has been around since the 1920’s but the was all the rage as a hobby in the 1950-60s. Talk about colouring inside the lines! And of course the instructions never encouraged you to ever sign your painting. So these paintings remain anonymous.

In 1953 alone the paint-by-number craze reached $80 million in sales.

I find mostly finished ones at estate and yard sales. Rarely do I find an actual unused or unfinished kit. Vintage paint by numbers can be purchased online and are popular for cottage decor and that kitschy look. 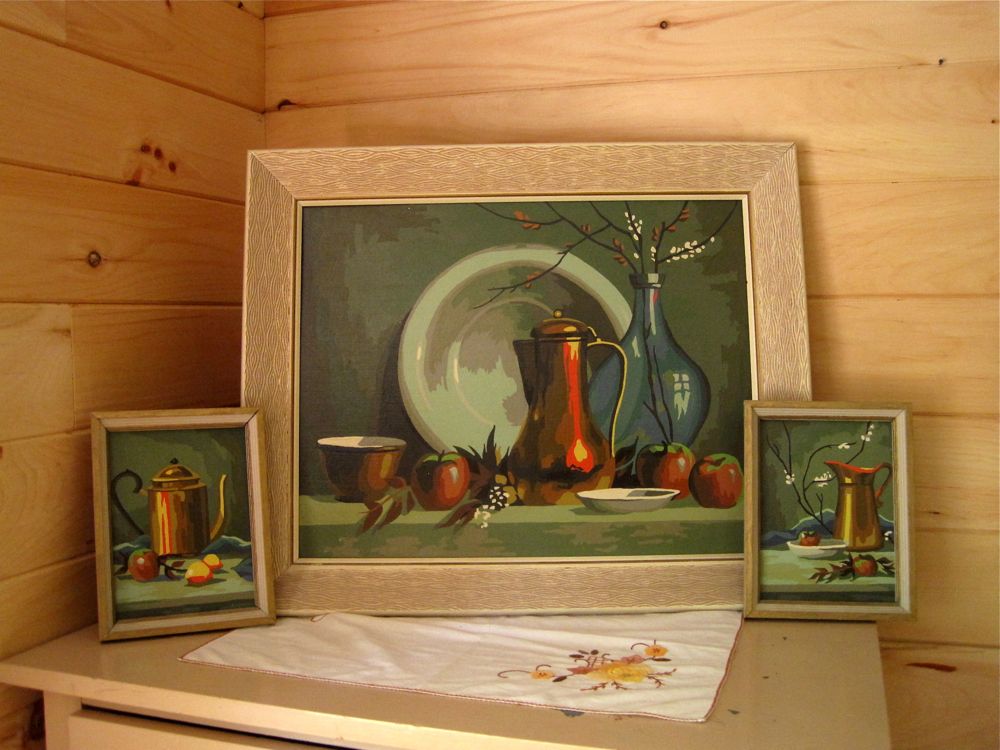 Available to buy at https://www.etsy.com/ca/listing/156937124/vintage-paint-by-number-still-life

The ubiquitous still life, marinescapes, hunting scenes, forests were all standard fare for the paint-by-number artist. 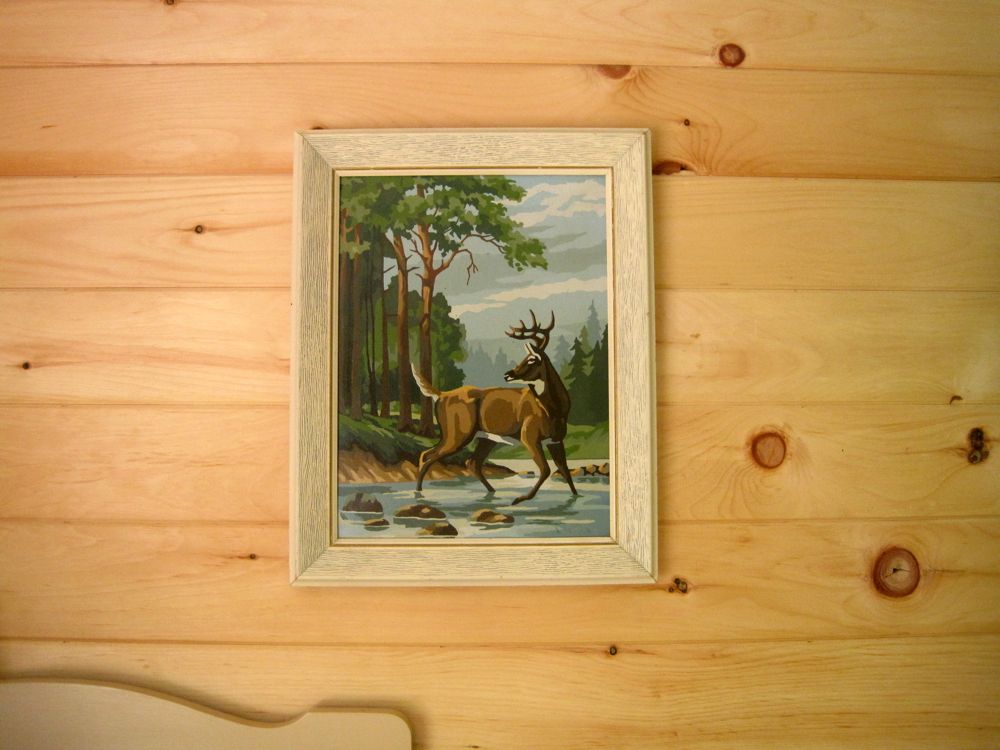 available for sale at https://www.etsy.com/ca/listing/156829592/paint-by-number-deer-scene-cottage-look

In his book, Paint By Number, William L Bird, Jr. “takes us on an unbelievable journey where art meets kitsch and popular and high cultures collide in a collage of home economics, leisure time fun, and art education, Bird revisits the hobby from the vantage point of the artists and entrepreneurs who created the popular paint kits, the critics who reviled them, and the consumers who enthusiastically filled them in and hung them in their homes.” 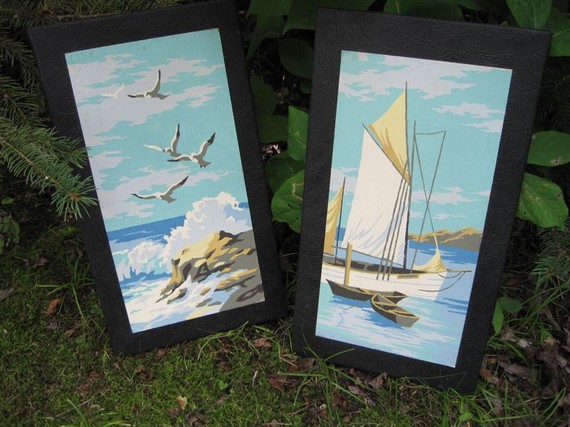 One can only make up a story of the hobbyist or detailed person who took hours to paint these, opening the tiny little plastic pots of colour with the numbered lids. 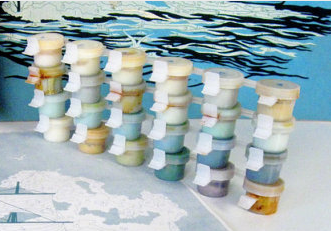 At least the paint by number craze got a paint brush into millions of hands of people who wouldn’t have otherwise tried painting.

Let’s hope that after painting for hours, the person was liberated to try painting on their own with the leftover paint at least. And maybe buy some canvas and tubes of paint and break out of the lines. 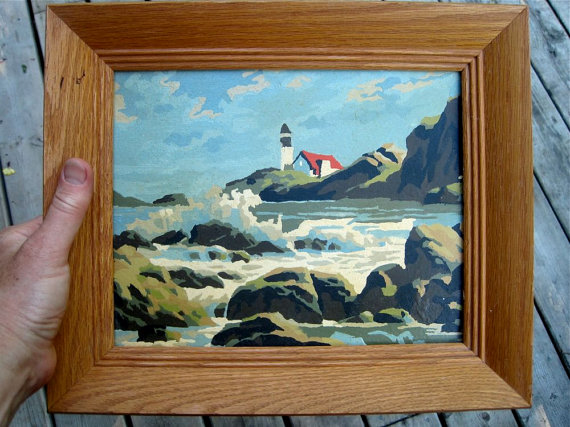 Available for sale at https://www.etsy.com/ca/listing/156840219/paint-by-number-lighthouse-scene-cottage